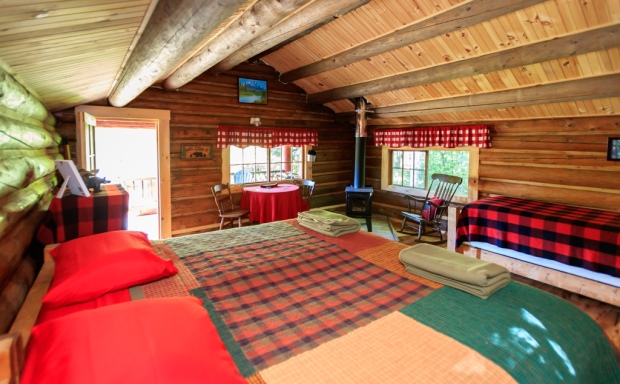 In the 1890s, only 50 years after the County was founded, the Bangor and Aroostook Railroad began carrying Boston’s wealthy elite to the Maine woods, and the Aroostook sporting camp tradition was born. Sporting camps were, and still are, a haven for fishermen and hunters: a place to get away from the hustle and bustle of the city, to make new friends and trade tall tales of sporting exploits, to eat like a king, and to rest weary bones in comfort in Maine’s most remote places. Nowadays, sporting camps also offer peace and adventure (depending on what you’re looking for) to hikers, nature enthusiasts, families, paddlers, artists, and others.

A “traditional” sporting camp is one that offers a full American plan, where guests come together in a main lodge to eat meals and socialize as a group. While the original “In the Maine Woods” guidebooks published by the railroad between 1900 and 1936 advertise well over 50 camps in Aroostook over the years, perhaps a dozen of these still operate in the County. At its core, a traditional sporting camp is a unique style of lodging; typically tucked into wonderfully-remote area, it is much more than a hotel, but also different from a B&B. Staff (often registered Maine guides) and guests typically interact more closely at a sporting camp than other styles of lodging, sharing secrets about this fishing hole or that, guiding guests on hikes and hunts, and chatting during meals and in the evenings. At a traditional sporting camp, the saying “when you’re here, you’re family,” often rings true.

Many more Aroostook sporting camps now follow the model of offering only self-catering (often called “housekeeping”) cabins, where guests are responsible for either cooking their own meals or traveling to restaurants, bypassing the social aspect that defined the tradition in its heyday. This style of sporting camp is perfect for those hunters, anglers, and adventure-seekers who want to be on their own schedule but still stay in some of the most beautiful places in the state.

Information about several Aroostook sporting camps (and more throughout Maine) can be found with the Maine Sporting Camp Association.

Rideout's Lakeside Lodge & Cabins
Rideout's has 14, lakefront/lakeside rental units and a lakefront Lodge/Restaurant in Weston, Maine on East Grand Lake. We also have a large...

Homestead Lodge
Homestead Lodge is the top black bear, whitetail and Moose hunting outfitter in Maine. We also offer some of the best partridge or grouse...

Crooked Tree Lodge and Camps
We’re here to provide you with the best experience when spending your hard earned money on your next hunt. It is our goal to make sure...

Arndt's Aroostook River Lodge & Campground
We feature four-season recreation facilities and services. Our facilities are extensive. They include: 55 RV campsites with hookups; 20 tent...

Red River Camps
Welcome to our neck of the woods: the North Maine Woods' Deboullie Township, 26 miles from Portage and 30 miles from the Canadian border....
Loading...
Show More ▼
Related Stories

Sporting Camps & Wilderness Lodges
In the 1890s, only 50 years after the County was founded, the Bangor and Aroostook Railroad began carrying Boston’s wealthy elite to the...

Spring Sporting Camps & Getaways
Come North this summer and experience a true Maine tradition; Sporting Camps. The heritage of Aroostook County sporting camps has been a...
2
Loading...
[6 of 2]